My first introduction to OpenStreetMap was almost a year ago, when Redon Skikuli, a fellow friend from Open Labs Hackerspace presented me this great project, which I really liked since the beginning. I started contributing at OpenStreetMap, editing the map using ID editor in the beginning , adding information to the map, co-organizing small mapathons and events at the local hackerspace that I am part of, and telling people I know, advantages of using OSM. As time passed by, I found out, that State of The Map, which is the annual gathering of OpenStreetMap enthusiasts from all around the world, would happen within a few months, in Aizuwakamatsu, Japan.

I applied with a presentation, and a few weeks later I received the confirmation email from Rob Nickerson. I was thrilled to find out that I was one of the chosen scholars by OSM Foundation to attend the conference, and that was a great opportunity to meet contributors from other countries and communities and go deeper into the OSM ideology.

Months passed by, after struggling to get the visa, with the huge help of Dorothea Kazazi, I finally made it. The moment has come to attend SoTM for the first time !!

Long trip to arrive in amazing Aizuwakamatsu, but the excitement to be there was way more intense. The conference started. After registering and receiving some swag and goodies provided by the organizing team and a delicious Japanese tea, time to start the sessions. 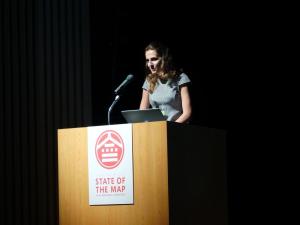 Moments from my presentation

I held my presentation “How to start an OSM Community” during the first day of the event, in the main hall. I explained how the OSM Community in my country was created and how it grew up, I shared my thoughts about essentials that are needed to have a healthy community, gave some tips on how to encourage new people to join OSM and how to create communities based on a country’s historical and cultural background. Didn’t forget to mention the importance of having more women involved, not only in OSM communities but in every other Free Open Source project.

After answering the questions that were kindly asked by the audience, I was ready to enjoy so many great talks, workshops and lightning talks I spotted on the agenda for the next three days, and a very productive ‘Local chapters’ meet up that happened the third day of the conference, where everyone shared thoughts about how local chapters and OSM Foundation can help each-other grow bigger. And shared the wish of the Albanian speaking community to become a chapter. 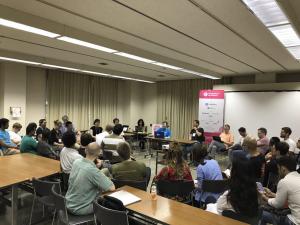 Local chapters meet up at SoTM 2017

Worth mentioning the dinner that was organized for all the attendees where we enjoyed an exquisite traditional Japanese dinner, an amazing show with Aizuwakamatsu traditional music, followed by the OpenStreetMap Awards, organized by Ilya Zverev, where I was more than happy to announce the winner of one of the categories.

Well, after all I didn’t only get to know so many other OSM related projects that I didn’t know earlier, but also earned even more knowledge, learnt even more tools and ways to contribute to the map, and last but not least, I met incredible people that deeply inspired me. We shared not only our knowledge but also some wonderful moments and memories in Japan, that will remain in my mind for a very long time.

Let’s take a moment to thank the organizing team for a wonderful SoTM 2017 !

As one of the phrases I spotted on one of the presentations says : “The big OpenStreetMap community is like a big family”

I could not agree more.